It bears repeating because at times I fear people have missed the reality that If you have a Blogger or a WordPress.com blog, if you Tweet, Tumbl or Flikr YOU are a publisher.

That carries enormous implications as Guy Gonzales points out in a Tweeted response to me: 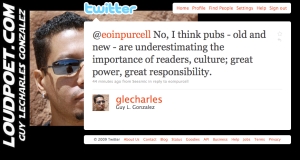 What you do about it is up to you, and it doesn’t guarantee success but it IS a fact.
That is why the tagline of this blog is:

It’s that simple — and that hard. And that inescapable.

It’s a line from a rather excellent article in Fast Company by Tom Peters. The article is called The Brand Called You and it’s about branding. It is deeply relevant to this discussion. You should read it.

Smashbooks looks at how authors need for publishers is being diminished.
Here

Mike Shatzkin has a great post that sums up the problem facing Print Publishers.
Here

I’m putting these up cold, but there will be a post that goes into detail early next week.

It is well worth dropping over to The Digitalist and reading Sara’s notes from her speech at TOCFrankfurt. I thought she was most refreshing for a large publishing as I mentioned in my previous blog about the event.

Lots to get done today,
Eoin

PS: The Bookseller covered the controversy and featured a response from Andrew Savikas.

The Frankfurt Cleared The Air Edition

Richard Eoin Nash’s post on the Frankfurt Book Fair blog is all kinds of excellent:

Not only, it turns out, are the readers of the world looking to buy our content if we can deliver it to them digitally, but the world’s leading hardware companies are looking to help us. Along with Sony, iRex, TXTR, and other dedicated reading device manufacturers exhibiting, presenting, and working the floor, two Apple executives were traversing the halls of the Fair to let publishers know all the opportunities that await them on that platform. (Let it be said: that platform, right now, is the iPhone. Not any other rumored device. Apple has not been in private discussions about a larger device and reports that they have are a hoax. But Apple does believe in the opportunity for the publishing industry’s content, contrary to the occasional snarky comment from Jobs.) Apple is working to improve the Books section of the App store to make it more browsable, and they are trying to help publishers find the right developers to work with.

You should take the time to read all the contributions from Richard and his fellow Book Fair Bloggers, they provide a nice slice of the fair.

Brian O’Leary has put the slides for his trouble causing presentation on piracy up on Slideshare, when you read through, you’ll find it hard to find the controversy and wonder just how tightly poised those knee-jerk reactions are.

The news of Google’s Google Editions, which first came to light back in June has been formed up by more recent news. Like this AP story:

Tom Turvey, head of Google Book Search’s publisher partnership program, said the price per book would be set by their publishers and would start with between 400,000 to 600,000 books in the first half of 2010.
“It will be a browser-based access,” Turvey said Thursday at the 61st Frankfurt Book Fair. “The way the e-book market will evolve is by accessing the book from anywhere, from an access point of view and also from a geographical point of view.”
The books bought from Google, and its partners, would be accessible on any gadget that has a Web browser, including smartphones, netbooks and personal computers and laptops. A book would be accessible offline after the first time it was accessed.

Of course as you would expect it is platform neutral (if web based/cloud based is neutral), omnipresent and smart. Anyone who thinks that devices are the future is living in the past.

There is a whole load of other stuff on the margins, but in terms of signal, I think this is it!
Eoin