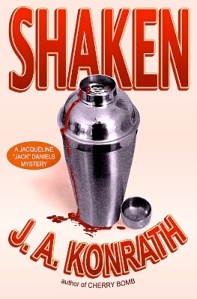 Amazon Encore the publishing imprint of the internet retailer has signed a deal with JA Konrath to publish his next ‘Jack’ Daniel title, Shaken.

This is pretty big news, as Mike Shatzkin points out:

this is a significant jolt to conventional publishing economics. Sales of Konrath’s $2.99 ebook will deliver him about $2.10 a copy (Konrath says $2.04; not sure where the other six cents is going…), as much or more as he would make on a $14.95 paperback from a trade publisher, and significantly more than he’d make on a $9.99 ebook distributed under “Agency” terms and current major publisher royalty conventions.

I noted here and elsewhere how Authors will drive change and pointed specifically to Konrath. It is very interesting that this deal is with Encore whose efforts I have also been watching warily for some time.

Publishers who didn’t see this coming, having been warned that such moves were on the horizon and in the aftermath of a series of similar deals really only have themselves to blame. I wonder what the reaction will be.

Print may wither much sooner than we expect!
Eoin