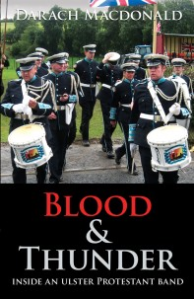 I’ve mentioned Blood & Thunder on this site before, it was one of the commissions I made at mercier Press. Well it got a full review this weekend from The Irish Times. And a favourable one at that!

Loyalists tend to be cautious about opening up to journalists, but the former Castlederg bandmaster and former Ulster Unionist assembly member Derek Hussey paved the way for MacDonald to get to know the band and its workings. But he said pointedly to MacDonald, “Pity it’s a Taig who’ll be [writing the book]”, a warning against any stitch-up – again a long-standing fear among many loyalists when dealing with the fourth estate.

But it’s the generous and different-footed perspective that makes this book. With objectivity, perception and a strong degree of empathy MacDonald tells the story of the band, interweaving through the narrative the political, religious, cultural and social impulses that drive its members and in a broader sense drive unionism, loyalism and Protestantism.

Don’s not wrong here, which is why I expect the majors will dominate those spaces where enhanced ebooks see success and lose out in the space where smaller players and self publishers can actually play the game.

And that means one of two things: (1) Either you need a sure-fire blockbuster title with a built in audience or (2) you need to be able to charge a pretty high price to make the P&L have a chance of working. I know…freaking bean-counters always in the way of doing cool things. So, yes, education can work (scale will deliver enough units), technical, children’s and some DIY can work (the enhancements add enough demonstrable value to carry a premium price), but fiction and most trade non-fiction? Without a brand (I’m thinking Star Wars and things of that ilk), it’s tough for me to see how the unit sales numbers will work, even if the costs of creating and producing the title decline, as they likely will. And I’m not one to believe that readers will consistently pay premiums for enhanced content that’s in the ‘nice to have’ but not ‘must have’ category.