Seeing an opening, Greenpeace campaigners brought their flagship, Rainbow Warrior, to New Zealand. Their plan was to sail into the military exclusion zone around the atoll, forcing the French to abandon their tests for fear of endangering life.  It was a gesture, and an insulting one. L’État responded.

I do love the writing and tone of the Bozo Sapiens pieces!

The lesson of World War I was that huge artillery barrages on entrenched positions achieve little. Armor was the answer – but the British were short of armor. They decided instead on a huge bombardment from the air. The hope was that a precise but devastating raid on key points would clear the way for a swift and direct infantry attack 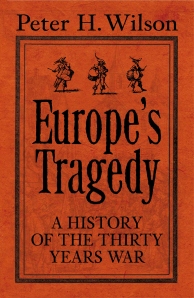 As ever my reading list is long with both History and Science Fiction but I think it is worthwhile mentioning a few of the history books here as they are most enjoyable.

The first and best of the lot is Europe’s Tragedy by Peter H. Wilson. There are excellent reviews around so I’ll point you to them rather than write my own right now. I’d point out one small irritant which is that Wilson has a tendency to shift what seems to me abruptly between theatres of conflict. I’m getting used to it, but combined with the huge line up of notable actors in the period, it can make reading harder going that I’d like.

The Times
The lead-lined window that sparked it all is still there, of course: you can even open it, and peer down to the dry moat into which the three Catholic imperial counsellors were cast on May 23, 1618 by a group of enraged Bohemian Protestant gentry. The room itself is on the fourth floor of the great Hradschin Palace, which looks over the river to the city of Prague. All is peaceful now, but it wasn’t then; it was the epicentre of a storm that was to engulf much of Europe for the following three decades.

Californian Literary Review
Wilson, whose grasp of 17th century politics and diplomacy is most impressive, makes two significant contributions toward understanding the origin of the Thirty Years War. First, the Holy Roman Empire, which unified the German and Slavic states of Central Europe under Habsburg rule, was a much more effective political force than is generally realized. Differing in organization from a modern nation state, the Empire was an elective monarchy which kept order and cohesion among the component dukedoms, electorates and free city-states.

BBC History magazine
Perhaps most importantly Wilson is an enemy of historical inevitability. The first 300 pages of this book, far from being a countdown to inexorable catastrophe, are largely about why the war should not have occurred. Against the familiar line that a chaotic and enfeebled Holy Roman empire of German principalities, cities and micro-territories was already long past its sell-by date in 1618, Wilson offers a feisty defence of imperial institutions and of their remarkable success during the later 16th century in solving problems of territorial inheritance, religious rights and political rivalries. 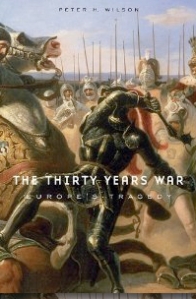 One final observation before I leave it for today, the cover for the British and Irish edition is top left and it really is a nice cover but the US edition is really something, far superior and much more attention grabbing so I’ve included it below right.

See what I mean?
Eoin

Great books deserve better reviewers than I
So I was recently sent a review copy of Thomas M. Truxes’, Defying Empire: Trading with the Enemy in Colonial New York which was published by Yale University Press in 2008. Needless to say I completely failed in my mission to read the book and write a review in any kind of decent timeframe.

But I did read it and it is wonderful. The book covers a fascinating period in Colonial history when the British Empire was fighting a war with the French Empire and American merchants were intent to benefit from the trading opportunities despite the heavy presence of British soldiers and the fact that in name at least they were engaged in treason.

A book that creates and sustains a brilliant portrait of 18th Century New York and brings to life the intriguing political and mercantile world of that city under British rule. Well worth reading, 7 out of 10.
For some more detailed review on the book, try here, here, here or here.
I also decided to try something I have been toying with for a while, a video review. It is my my first such effort and is decidedly patchy, but here, in honour of along delayed review it is.

I hope someone enjoyed that!
Eoin

Warsaw
I’ve written before about the completely fascinating Polish-Soviet War of 1920 and Adam Zamoyski’s excellent book on the topic: Warsaw 1920: Lenin’s Failed Conquest of Europe

. The key battle in that war The Battle of Warsaw began on this day 89 years ago. The initial stages of the battle were not that promising for the Poles as an extract makes clear:

On 13 August Sollohub attacked the outer perimeter in force, and the Polish 11th Division abandoned its positions and fled. Sollohub’s 27th Omsk Division pursued it and was joined unexpectedly by the 21st Rifle Division of Lazarevich’s army, which had strayed into the wrong sector. Together they overran the little town of Radzymin, twenty kilometres from Warsaw, but happily for the Poles the two units became so entangled that they were unable to pursue their advantage.*

Blenheim
John Churchill, the Duke of Marlborough , was one the most exceptional military leaders of British history. His most celebrated victory is Blenheim when he prevented the armies of France from advancing towards Vienna in a crushing defeat made possible by his rapid and secretive march from the Low Countries to the Danube. You can a description of the battle in The Fifteen Decisive Battles of The World by Edward Shepherd Creasy. There is a version here in Google Books, sadly you cannot download a copy because although the text itself is well out of copyright and firmly in the public domain, the only copy that seems to be available on GBS is a Forgotten Books version (thus there is IP in the setting and it is not a public domain version)

Below is a great video on Marlborough as a Great Commander.

Quite the day for climactic battles is it not?
Eoin