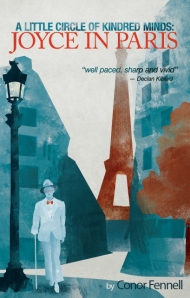 Kevin power reviewed A Little Circle Of Kindred Minds: Joyce In Paris by Conor Fennell in The Sunday Business Post this weekend. It was a smashing review (which, as the publisher, I heartily agree with), here’s a flavour and a link:

A Little Circle of Kindred Minds (the title is from Joyce’s story A Little Cloud) is thoroughly researched, cleanly written and full of sharp-eyed critical insights.

But you could just as easily enjoy it as a compendium of literary gossip, a guidebook to artistic Paris or even as a potted history of how various Irish artists responded to the policies of the nascent Irish Free State.

via Rejoycing in the literary luminaries of Paris | The Post. 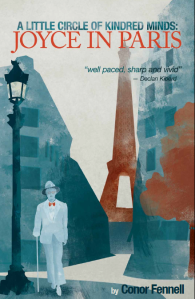 So this month I published a book. It was an incredible experience, especially because it was with a talented author and about a fascinating topic. The book is called A Little Circle Of Kindred Minds: Joyce in Paris and it’s written by Conor Fennell. As you might imagine, it is about James Joyce and the group of friends he built up during the twenty years he spent in Paris. All of which serves as precursor to the article below from The Times Literary Supplement yesterday:

“There Joyce continued to retreat from formal Irish identity. At the end of 1931, when his father died in Dublin, he would not go to Ireland for the funeral, as he felt he would not be safe from prosecution. In 1932, he declined an invitation to a St Patrick’s Day party in Paris when told the Irish ambassador would be there; he feared his presence might imply an endorsement of the new Free State. That same year he refused an invitation from W. B. Yeats to become a member of the new Irish Academy of Letters as “I see no reason why my name should have arisen at all in connection with such an academy” (though he wished it success). Indeed, as he was writing Finnegans Wake, he asked Miss Weaver, “Why go on writing about a place I did not dare to go to at such a moment, where not three persons know me or understand me . . ?”.

via The British James Joyce by Brenda Maddox – TLS. I wanted to suggest that what Maddox is saying is just not plausible. Especially when you consider just how obsessed with Dublin Joyce was. Just as an example I thought I’d share a little of Conor’s excellent book:

When you read about the man in that way it becomes impossible to believe he was anything but Irish in the true sense. Yes he might have, at times, had issues with the state and even some of the people, but there was no way he could be described a s British as Maddox seems to claim. I could say you should read more of Conor’s book to uncover the truth and I really do think that would help, but perhaps that might be just a little self-serving!