There’s so much in this piece I have to take two extracts. This quote in particular is incredible:

“Being an author is like being a shark, you have to keep swimming or you die,\” he says. “People don\’t want to wait a year and a half for the next book in the series, they want instant gratification.”

To ward off the sloppiness that inevitably comes with such speed, Mr. Osso pays two editors and a proofreader to comb through his books for errors and typos. His content editor, Dorothy Zemach, a freelance editor who used to work for Cambridge University Press, says it can be taxing to keep up. “There are evenings when my husband says, ‘Don’t check your email, there will be another book from Russell,’ ” she says.

The trend towards author services is so unstoppable now that it I becoming increasingly important that those providing the service are accredited and capable. This has got me thinking lots again about the author/publisher/agent triangle and how things might change in the years ahead.

There is literarlly NO accounting for taste:

Wise words from Marco, worth holding in mind all the time, especially in the sections below and when he admonishes us to have “a domain name you control and are able to easily take your content and traffic with you to another tool or host at any time*”:

Treat places like Medium the way you’d treat writing for someone else’s magazine, for free. It serves the same purpose: your writing gets to appear in a semi-upscale setting and you might temporarily get more readers than you would elsewhere, but you’re giving up ownership and a lot of control to get that.

Whether it’s worthwhile to you should depend on whether you want to establish yourself as a writer, whether you want to get paid for it in some form, and whether you can get an audience elsewhere on your own. Plenty of people can answer “no” to all three, especially if they do something else extremely time-consuming for a living and want an occasional place to write, but don’t have the time or inclination to try building regular audiences or become known for their writing. People who sometimes want to write, but never want to become even part-time writers.

via Medium and Being Your Own Platform – Marco.org.

* I use WordPress.com to run my site here, but I own the domain name and several others on which I can run the content which I export and back-up regularly. 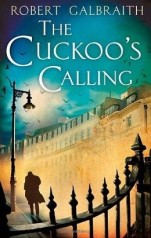 I can’t say I agree with this argument

But there’s another downside, which is the negative impact on thousands of writers the public has never heard of or, more importantly, had the opportunity to read. In that sense, it could even be argued that Rowling’s well-intended hoax has backfired, turning into yet another story about fame in the modern world.

For one thing, readers always have the opportunity to read debut authors, though they may never consider them and they may choose not to read them, given that readers’ time is limited and the chances of getting a bad book are high, it’s understandable that they often pick authors they already know and like.

Secondly the publishing industry has always been hit driven, there’s some argument that it is becoming even more so with the bandwagoning effect of the internet, but that’s a question of scale rather than kind. New writers always struggle to get exposure in this environment. But even the hits start small until something or someone pushes them over an edge, that can be advertising spend, celebrity endorsement, top line publicity, word of mouth or just dumb luck, but even JK Rowling started at the bottom with Harry Potter, the initial print run for The Philosopher’s Stone was around 1,00 copies!

Finally no writer is entitled to success, just as no publisher or bookseller is entitled to it. We all have to work to reach readers and entice them to read book (hopefully our books). Sometimes that means publishing a few books before gaining a readership, sometimes it may mean a writer never gains that readership despite being talented. There’s no foolproof way to guarantee success, you just have to keep plugging away at it and finding good partners to work with and hoping you can do everything right so that if success comes, you’re ready.

Five minutes ago I read a press release from Amazon about how it was expanding its Kindle Worlds project to incorporate new writers (and impressive ones at that). i was struck by how many of those new writers came from or were converts to the world of self-publishing and it reminded me once again how powerful and useful Amazon’s policy of accommodating self-publishers and small publishers has been in their development of a digital publishing platform (see my thoughts on this earlier in the week over on Medium).

And then I read these paragraphs and my brain exploded:

“Good storytelling for me starts with great characters, no matter the format,” said Kindle Worlds Archer & Armstrong author Scott Nicholson. “I’m thrilled that Amazon has been pushing the digital frontiers to open up even more sharing of ideas and building new communities around the most popular characters and stories.”

Amazon Publishing will pay royalties to both the rights holders of the Worlds and the author. The standard author’s royalty rate (for works of at least 10,000 words) will be 35% of net revenue. Amazon Publishing will also pilot an experimental new program for particularly short works—between 5,000 and 10,000 words. For these short stories—typically priced under one dollar—Amazon will pay the royalties for the World’s rights holder and pay authors a digital royalty of 20%.

Before I read those words, I thought Amazon Worlds was a clever piece of distraction from Amazon, a way to get more people on the Kindle platform, perhaps a mine for future talent and a stick to beat publishers with. After reading those two paragraphs I realised that Amazon Worlds is a whole new revenue stream for aspiring writers and established writers, it’s co-opting the edge and making it mainstream and crucially introducing a revenue model that work for everyone.  What’s more in this model, because they own the platform and delivery system they still keep a chunk of the revenue.

I’m annoyed at myself for missing the import of this earlier (I can only say in my defence that the original Kindle Worlds press release came to me while I was on holidays in spain and my mind was very far from business models and digital publishing.

Think  about this new model for a few seconds. Successful writers, who in genre fiction were already pretty supportive of fan-fiction anyway, now have an active reason to support and encourage fan-fiction that is licensed by Amazon. They have a reason to drive people onto the kindle platform because when they see stories based on their worlds and characters, they will profit from them.

Would be writers have a great reason to use the opportunities afforded to them by kindle Worlds to hone their skills, for one its free and legal, for another they might actually benefit by selling some copies of their work and finally they might get noticed by doing it. noticed by the original creator of the world they choose to writer in or about, or noticed by Amazon Publishing which can spot their talent (read sales data) and can snap it up before anyone else even notices that a new talent has emerged!

All round Kindle Worlds is a much bigger deal than I realised!