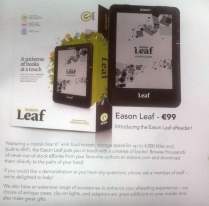 I’ve often written of the value of inaction in the face of an uncertain future. Today, I want to write about both the rewards and the costs of inaction in a specific case, Ireland and the ebook retail business.

Eason, by far the largest bookstore chain in Ireland, is set to launch an ereader onto the Irish market in December. It’s called the Eason Leaf. To be fair to Eason, it has a natty offering, a 6-inch, touch-screen eInk device with weeks of battery life and storage for 4,000 titles. All for less than €100. It could plausibly become the best-selling dedicated ereading device in Ireland after the Kindle and create a mass market for ebooks sold via the Eason ebookstore.

You could say that the company’s move is a great example of collecting the rewards of inaction. Having followed a sensible and cautious strategy in a period marked by uncertainty and using the intelligence it gained during that period, Eason acted decisively.

It bought in a device from an OEM, branded it and is selling content directly to readers via its own ebookstore. In this way Eason can build a closed circle for its customers with itself at the centre and all the while build a digital retail position to rival its physical one.

No doubt Eason has seen the work Barnes & Noble was able to do in the US, converting heavy book readers to Nook users through in-store selling efforts and hopes to replicate it.

Even if you see the move as more defensive, ie a way to capture a limited audience of ereading book people, while ensuring the majority stay devoted to print, the strategy has the benefit of being low cost. I don’t often have praise for Eason, but in this instance I think the company has played a good hand. Given the choices available to Eason I think it has taken by far the best option it has.

The costs of inaction of which I wrote at the beginning then are being paid by the other ereading/ebook retail players (Kindle aside) whose inaction has meant their ereader presence here is not backed by a convincing consumer message, and certainly not by a retail store presence. They have not scaled rapidly enough in order to stifle competition,

Kobo seems to be making the most of its distribution via chains like PC World (distribution which includes even the keenly priced Vox table at only €139 which packs a fair punch relative to the Leaf) but name recognition is low and no BOOKSELLERS seem to be on board except WH Smiths whose High Street retail presence in Ireland consists of one concession in Arnotts. Without a convincing way to reach the readers how will Kobo convert them from print to digital?

Nook‘s plans are mystifying though the company does seem to be offering to ship tablets and ereaders to Ireland from its UK Nook site. If Kobo has a name recognition problem I wager Nook’s is far, far worse in Ireland. Nook then faces a huge challenge in establishing a name, a brand and a conversion strategy in Ireland.

Apple is the only competitor with some chance of making gains in 2012, with the iPad mini, but in truth I suspect that device will not be a book readers choice. I’ll wait to see.

The truth is though that all these companies could have acted more forcefully in Ireland at any time, it’s a small, English language territory with pretty friendly tax arrangements. It was inaction when the time called for action that led them to where they are now.

The costs of inaction for the major Amazon rivals are first and foremost that a local competitor in a small local market looks set to steal a march on them. It seems so very unlikely but it’s really happening (I wonder who will be the first to pondering buying out the Eason operation should it prove successful?).

In an English language market that could easily be technologically serviced from the UK or US (as Amazon does with Kindle) so long as the retailer made a small commitment on the ground marketing and brand building and converting print readers to digital, a small bookseller with great physical footprint and footfall but not much by way of a digital track record might just, strangely, be a leader in this shift from print to digital in Ireland.

We always do things a little differently here!

7 thoughts on “The Rewards & Costs Of Inaction”